A talented pair from Canterbury have taken out 2020 FMG Junior Young Farmer of the Year title.

Jack Coakley and Mac Williams from St Bede’s College were crowned the winners after a week’s worth of challenges. 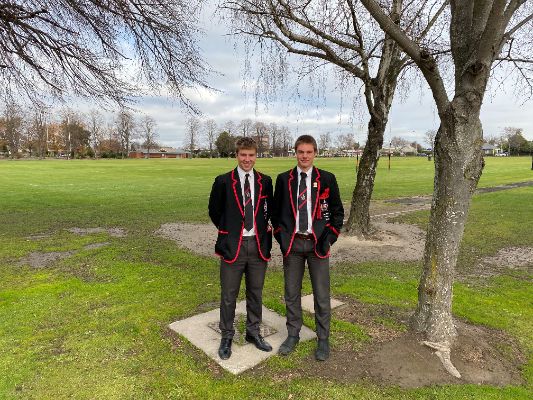 The pair entered Friday morning in 5th Place and Mac says they tried their hardest throughout the day.

“It’s really rewarding to be able to compare your skills to others around the country, and prove to yourself what you can do when you put your mind to it and take your passion to the next level.”

Nicole Wakefield-Hart and Hannah White from Geraldine High School took out the FMG People’s Choice Award with their special video.

Three South Island FMG Junior Young Farmer of the Year Regional Finals and the Grand Final were all forced to either be cancelled or moved online when Government restrictions around events started coming into place in March.

New Zealand Young Farmers CEO Lynda Coppersmith says the quick decision was made, to move everything online and deliver a contest for Teen Ag members, alongside the AgriKids contest for primary school children.

Organising to host the event online for the first time, she says, created some new challenges to work through.

“Working with two contests, 35 teams, 12 sponsors, 14 modules as well as all the other tasks was a huge logistical undertaking. It took a lot of things to fall in to place, a lot of people to make it work and a really strict time frame,” she says.

“The Events team has done the most amazing job to pull this off and I cannot thank them enough, along with our Sponsor family and volunteers for all the hard work they all have put in to make both events happen and run seamlessly, albeit a few very minor tech hiccups during the Face Off which provided a few laughs.”

The FMG Junior Young Farmer of the Year Grand Final started on Saturday 13th June, where the two teams in each region, went head to head creating a tumble composter from a barrel for the farmlet challenge.

The lifting of Alert Levels and restrictions allowed this to go ahead, with help from Young Farmers volunteers who hosted and judged the regional challenges.

Speech topics were handed out during the week and innovation projects were handed in on Wednesday, before the big Grand Final day on Friday.

The 14 teams presented their speeches, undertook an exam and competed in a series of modules.

The speech topic was based around carbon emissions and water quality relating to food production in New Zealand and in the Innovation Project, teams had to produce a business plan and five minute marketing presentation on how they would develop and diversify a 250ha property in the current COVID-19 local market.

“The farmlet was pretty hard, we got a different set of equipment compared to others but it was alright in the end, we found that very, very tough,” Mac says.

He enjoyed the innovation project, saying it wasn’t things you’d usually get to do as a teenager.

They broke the 250ha farm down into 40ha of sheep milking 170ha of lamb finishing and 15ha of market garden.

“We came up with an idea of producing and selling our own meat for value add, an abattoir and our own sheep milking processes,” he says.

“We learnt a lot actually, the biosecurity module made me think a bit more and I managed to use a farm that I work on as a base for it.”

The pair thought the hardest part of the week was the preparation and also time management.

“We put so much work into it to try and make sure we got top marks for everything - that was the hardest part about it; the work we had to put in,” Jack says.

“I thought online was actually a really cool way of doing it, it was super smoothly run so we didn’t have any difficulties with any technological issues and it was different to how it was run in previous years which made it really exciting and new.”

Lynda Coppersmith says nothing can replace the excitement and atmosphere of a physical contest but it was still a very exciting Grand Final with everything live streamed online.

“We are very thrilled we were able to reformat parts of the contest to be able to deliver some champions for 2020.”

After finishing school, Mac plans to head to Massey University to study veterinary, meanwhile Jack wants to head further south to Lincoln University and is currently tossing up what agricultural based degree to study.

It is officially Grand Final week for the FMG Junior Young Farmer of the Year and AgriKids contests.

Despite a hiccup in the road with COVID-19 cancelling three regional finals, the whole contest was moved online, allowing the South Island Regional Finalists to be chosen.

This week the FMG Junior Young Farmer of the Year competitors are taking part in a series of activities before the big Grand Final on Friday.

It’s also full steam ahead for the 21 AgriKids teams who are busy preparing for the Grand Final on Friday too.

New Zealand Young Farmers CEO Lynda Coppersmith says it has been a mammoth effort to turn the whole Grand Final into an online event.

“The events team, the family of sponsors and everyone else involved has put a huge amount of work in to completely reformat the Grand Final, doing something we have never done before,” she says.

“It’s been incredible to watch and I am so proud of the team for putting this together, as well as all of the NZ Young Farmers member volunteers, competitors, teachers and parents who have helped out along the way and have been just as excited as we are to host it.”

The first task for the FMG Junior Young Farm of the Year competitors was to complete a farmlet challenge with both teams in each region going head to head on Saturday.

Northern Region cousin duo from Okaihau College, Nick and Zoe Harrison, took out the challenge and are currently topping the leader’s board out of the 14 teams.

Volunteers from Young Farmers’ Clubs helped to facilitate and judge each regional event, where teams had to create a tumbling composter using a barrel.

Nick and Zoe say the challenge went pretty well and they managed to get it done in time, plus put in a few extras.

“I do quite a bit of stuff with tools, building and fencing and those kinds of things,” Nick says.

“It’s right up our alley, it’s something we can naturally do and deal with,” Zoe agrees.

But the pair say they’re not taking the win lightly and getting ahead of themselves.

“There’s a lot of work to be done, there’s a lot of writing, a lot of thinking. I think we’re glad we’re a hopefully a few points ahead in the farmlet because that’s probably going to make a major difference,” Zoe says.

Not having the Grand Final in Christchurch as originally planned before COVID-19 restrictions started to come into play is also a tad disappointing for the pair.

“It is what it is, but we’re really grateful that we were able to do the farmlet challenge practically instead of doing the whole Grand Final all online,” she says.

Now they reckon it’s time to stop mucking around and focus on getting all the work done.

On Wednesday the FMG Junior Young Farmer of the Year teams will hand in their innovation projects and also get their speech topics.

Come Friday, they will compete online in an exam, a series of modules and also present their speeches.

The top five  point scoring teams will then move into the “Face Off” where they will battle it out in a famous Young Farmer of the Year styled quiz.

On Friday the AgriKids teams made up of three competitors will also be going head to head in an exam, modules and completing an agri-task.

The top five teams will then head into the AgriKids “Race Off” which is also a quiz.

The awards ceremony will be held at 6pm – where the winners of both contests will be announced as well as the FMG People’s Choice winners.

Lynda Coppersmith says it’s shaping up to an epic day for everyone involved.