S54: FMG Young Farmer of the Year Practical Day wraps up after a day of rain

The seven FMG Young Farmer of the Year Grand Finalists have completed their hardest day of challenges yet, at Barge Showgrounds in Whangarei.

Despite the fact it poured with rain the entire day, it did not dampen the contestants' spirits or their spectators – who all came out in full force in their wet weather gear.

The seven Grand Finalists’ on-farm practical skills were put to the test today (Friday 8 July), with tasks and challenges from all facets of the food and fibre sector.

They had to complete seven modules, one head-to-head challenge, a farmlet and an agri-sports challenge.

The FMG Junior Young Farmer of the Year and AgriKidsNZ teams also competed in their practical day challenges, with hundreds of spectators watching the action go down.

Practical Day kicked off at 7:00 am and was broadcast live on Three with William Waiirua from AM on-site, showcasing the best parts of contest, the food and fibre sector and Northland to the rest of the country. 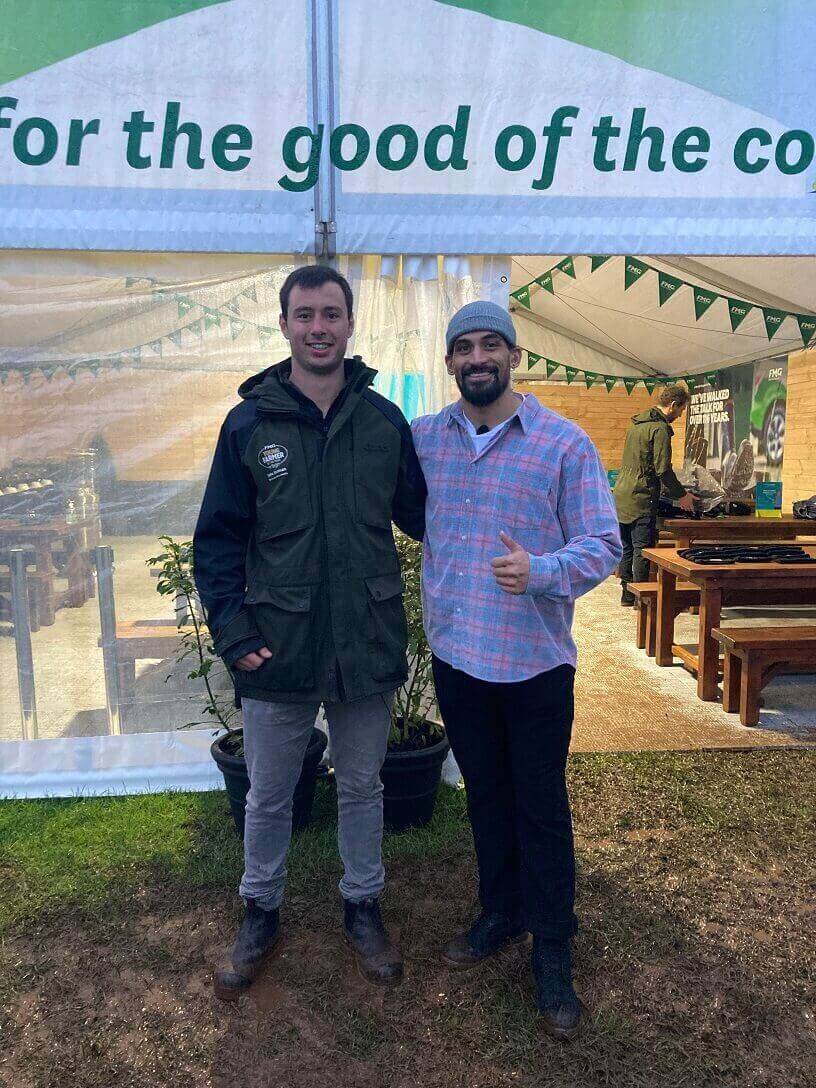 Waiirua’s practical farming skills were also put to the test, where he was challenged to use a digger and drop a rugby ball into a drum.

The Rock Drive's Jay Reeve and Duncan Heyde were also on-site gathering interviews and stories for their radio show, after hosting the Norwood NZYF National Awards the previous night.

Jay Reeve and Duncan Heyde from The Rock Drive staying positive in the rain.

The head-to-head challenge, hosted by Fire and Emergency New Zealand (FENZ), aimed to test each contestant's ability to build a portable dam out of everyday items and move water from one point to another.

It tested their abilities to think on their feet, only being allowed to use the water pump twice which meant they needed to build a dam that could hold the largest volume of water possible.

They were given several items to construct their dams, including ladders, a picnic table, a tarpaulin, wooden stakes, cable ties, pallets and hoses.

They were marked on the volume of water transferred from dam A to dam B, structural integrity, ingenuity, and resourcefulness.

They were also penalised for any health and safety breaches, which included securing the pump in both dams before they started it, wearing protective earmuffs and other safety guidelines.

For each health and safety violation, contestants had to run a lap around the field before being allowed to rejoin the competition.

An Agri-Sports challenge tested each competitor's speed, stamina and strategy with top points for the first to cross the finish line but also points tallied up across the tasks they had to complete within it.

They were given a scenario as members of their local volunteer fire brigade – after a day on the farm cleaning up after a storm, they were called out to a small fire.

They had to deal with a downed tree, unload a digger from a trailer, use the boom to manipulate two tyres onto a cone, reload the digger onto the ramps and then strop it down.

They had to set up an irrigation pod, fillet a fish, dress in full firefighting PPE and extinguish a fire before getting back on their Honda two-wheeler and racing to the finish line. Otago Southland's Alex Field was the first to cross the finish line but did not complete many of the challenges involved.

“Halfway through I pulled something in my back and had to make the tactical call to pass all the stuff just to cross the finish line,” he said.

“Hopefully, it doesn't hurt me too much for the scoring, but it was the best I could've done.”

Each health and safety violation in the challenge also saw the contestants run to the vehicles and peel a kumara as fast as they could before rejoining.

Northern's Tim Dangen came in not too far behind Field, acing the digger challenge.

“I definitely started failing towards the end of the seven modules, my last two were pretty weak I feel.”

“It's probably gone as well as it could for me, I can't complain in that aspect, I don't think I've bottomed out in anything and I just hope I haven't fallen away too much in the things that I've struggled with,” he said.

The farmlet challenge saw contestants complete a bunch of tasks with a budget of $1,320.

The had to construct a 3-wire electric fence, make a gate, a railing fence, a waratah fence, install a trough and construct a dog kennel.

The Ministry for Primary Industries tested the seven Grand Finalists on three components of an integrated farming plan, which included identifying strengths and weaknesses of Land Management Units marked on a farm map and their possible uses, seasonal animal welfare needs and planning a year’s development programme for staff.

New Holland required the contestants to operate a front-end loader and trailer, navigating through an obstacle course which required towing the trailer and reversing. They were also required to attach loader forks, hitch the trailer, load fertiliser bags onto the trailer and tie down the load appropriately.

WorkSafe’s module was designed to test contestants’ ability to identify, manage and communicate farm-based risks to health and safety. They were given real-world scenarios, where they had to recognise and manage risks to their farm teams through briefings, plannings and weaving in worker engagement, participation, and representation.

Contestants were required to correctly operate a seed drill with Ravensdown. They were marked on their ability to optimise germination and sow seed in an efficient manner, using technology, products and expertise to reduce impacts and optimise value from the land.

The Environmental Protection Authority's task was set in wetlands, where contestants looked at Enviro DNA testing, interpreted data and walked through problems and solutions. They were also tested on their knowledge of riparian planting, where it should take place, be planted and the expected impact of planting on waterways.

Honda put contestants through their paces with a quad bike, operating the farm vehicle through a range of tasks including hill riding, instructing a farm hand to operate it correctly and back a trailer.

Tasman's Jonny Brown said the modules were a wide variety but went well for the most part for him.

“It's always a good sign when a dairy farmer sees a milking plant,” he laughed.

He found completing all the tasks in the farmlet to be the hardest challenge,

“I had a crack at everything but by no way was I done,” he said.