Taking a year off to travel the country with a cat, a two-year-old and a caravan in tow, was the holiday of a lifetime for Jonny Brown and his better half, Shae Atkinson.

The Tasman FMG Young Farmer of the Year is adamant taking time out and getting off-farm should be a priority for everyone. 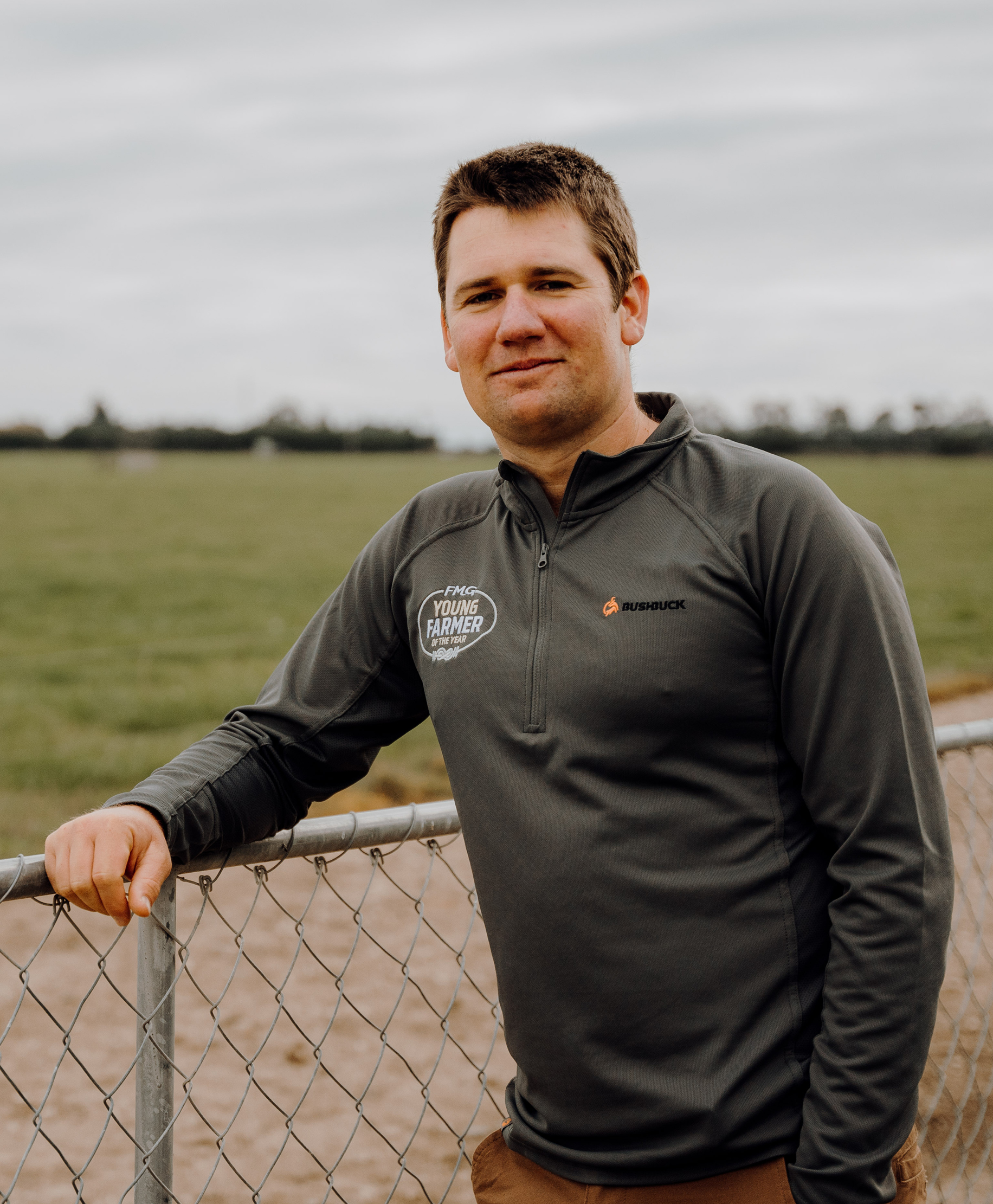 "It gave me a lot of perspective and it made me realise that the dairy industry is hard, but the best defence is a good offence. You can do things to make sure you put yourself where you're not going to fail or the likelihood of failing is way less than 50/50," he says.

Since the caravan roadie ended in 2020, he's been managing a dairy farm manager in Bankside, milking 1,300 cows on a Dairy Holdings Ltd farm.

He and Shae took over contract milking on the 1st of June.

It's a low input grass system, growing and harvesting as much grass as possible at the lowest cost, averaging 350kg of milk per cow, annually.

Vote for Jonny in the FMG People's Choice Awards here

Finding reward in being able to see what he achieves each day, the Dunsandel Young Farmer also likes working in a corporate dairy farming environment.

"Corporate overheads allow you to have certain skills in the business. At the moment in terms of health and safety and environment and so on, there's too many skills required of the farm manager to meet all the compliance and get the job done too," he says.

He enjoys managing people and working in a large team and knows those are crucial factors to making the dairy industry an appealing place to work and retaining good staff.

"I want to be a leader in the industry in how to run teams on farms. It's about running things as well as you can, but you've still got to deliver the bottom line if you want people to uptake it," he says.

His purpose is to make dairy farming an industry he's proud to work in and leave it a better place for his two boys – Harrison, 4 going on 5, and Thomas, 1 -  if they are to follow in his footsteps one day.

"Burnout needs to be a thing of the past, people who put the effort in should be able to reap the rewards," he says.

"At the moment there's a lot of expectation that if you're self-employed you're there every day and that doesn't lead to high performance."

"I want to see an industry where the participants have more than the farm, they have hobbies and interests outside the farm gate they actually do, and operators that take time off and let their people grow." 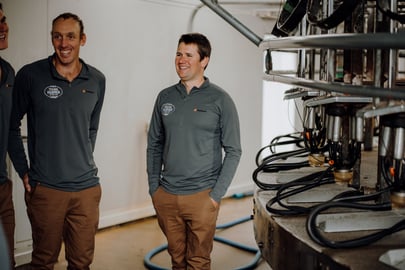 Having worked his through the ranks of the dairy industry as a worker, contract milker and farm manager mainly around Canterbury, he finds bigger farms more appealing.

"If you've got the mindset to juggle, large farms are far easier than small farms because you've got more cards to play each day. You can build in a bit of flexibility by default whereas on a smaller farm, you've got a small-time window to do your manager’s job because you're required back in the shed in the afternoon."

He's certainly had his challenges in the workforce too, contract milking on a difficult farm in Culverden for a year.

"It severely affected my mental health, I just had to work out a way to get through it and that was day by day."

"It very much changes the way you do things and then what you do on the other side, when you pretty much know you're going out to have a losing day, every day."

All packed up to go to the wintering block this afternoon. Tractor delivered breaks set up. Tomorrow we walk the first half of the cows up. Stay tuned. #fmgyfoty #winterholiday #areyousureitaaholiday pic.twitter.com/Na13lOOD1b

Trying to make the best of a bad situation, they put one foot in front of the other and made lists to tick off.

The next job also didn't tick all the boxes.

"The right farm is one of the key ingredients to being successful. Very few people can turn a toilet into a palace," he says.

The caravan was a backup plan on their list and after not being able to find what they wanted, they headed off on their adventure in 2019.

"It was without a doubt the best decision of my life, I highly recommend people taking that time out," he mentions. 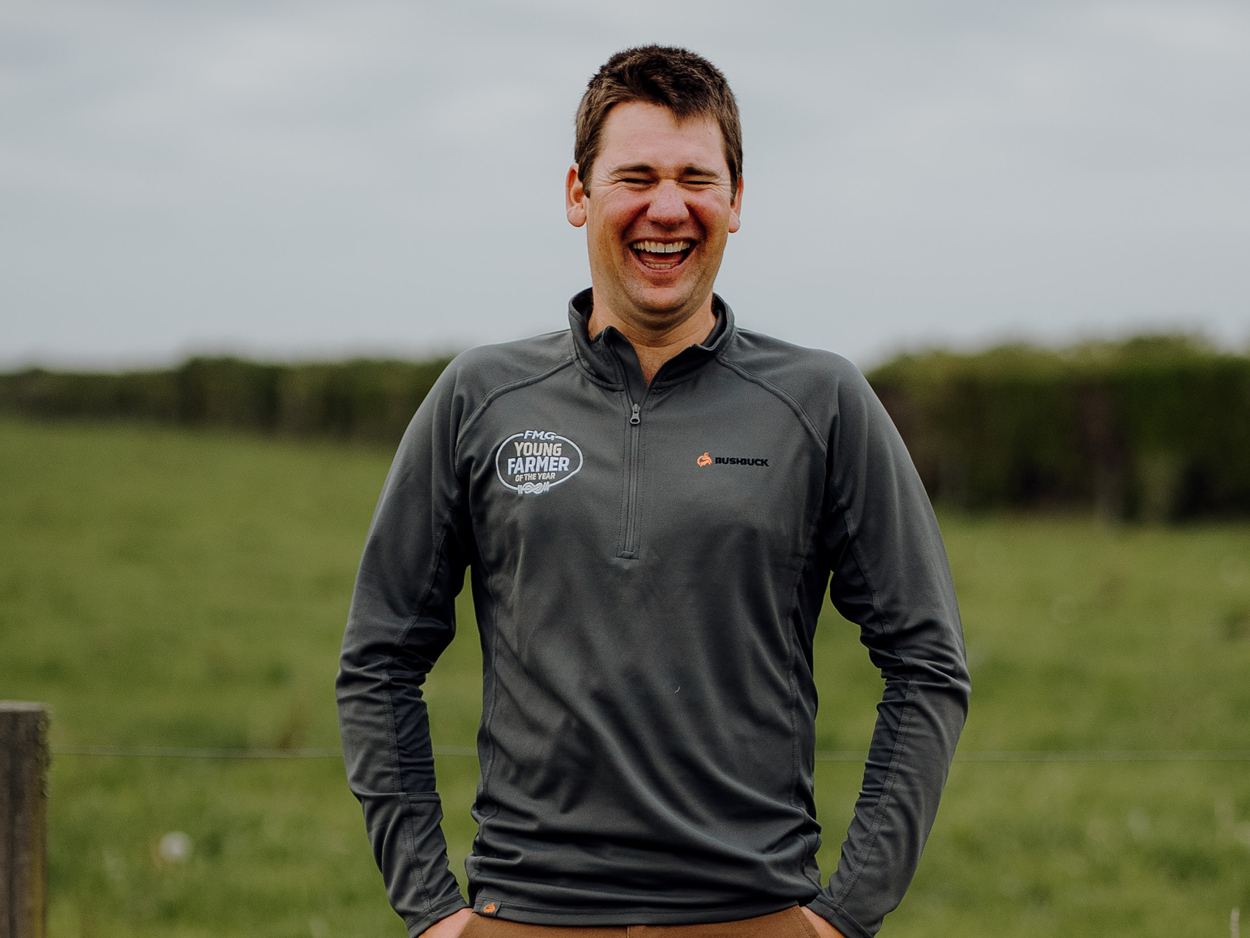 Passionate about being able to give back to others, Brown is a pediatric blood donor.

An O-blood type, he's on his 15th donation, averaging three donations a year – just under the maximum of four he can give.

At 31 years old and ageing out of New Zealand Young Farmers, it's also his last shot at being named FMG Young Farmer of the Year – for good.

Having competed in three Regional Finals before getting through on his fourth shot, he says the doubt had started to creep in.

"It was a bit of a relief to be fair, I came close two other times and asked myself 'can I actually get over this hurdle'," he said.

But he likes the competition, and farming is a field he's competent in.

'Reasonably intelligent', he thinks if the questions fall his way in the quiz paired with his strengths in practical day, it could work to his advantage.

Overthinking and a 'lack of original thoughts' he labels as his weaknesses within the Contest environment.

A Lincoln University Alumni with a Bachelor of Commerce (Rural Valuation and Agricultural Management), Brown grew up in the Bay of Plenty.

Parents Ian and Andrea Brown grew part of the family corporate business to 1,500 cows and added a second shed before they retired to Leeston in 2021.

Now, the family corporate is one of the region's biggest milk suppliers milking 3,000 cows and also growing, harvesting and packing 100ha of Kiwifruit.

At the ripe age of 98, his Grandfather Jimmy Brown has only just stepped down from the business.

Maybe one day, Jonny Brown sees himself sitting on the Board – but he has other plans first.

"We want to own the herd on the farm we're on in about five years. Farm ownership's not a real goal, it's about putting myself in a position where I've got skills to add value. If farm ownership comes along as part of that, then that's awesome and if it doesn't then no biggie. It's about having an asset base that's large enough that I can start doing what I want."

As the dairy industry constantly changes with new regulations and legislation, Brown says the key is to just roll with it.

"If you can react in a positive way that's half the battle and then you just move on. The goalposts shift so now you're just heading towards the next pair of goalposts."